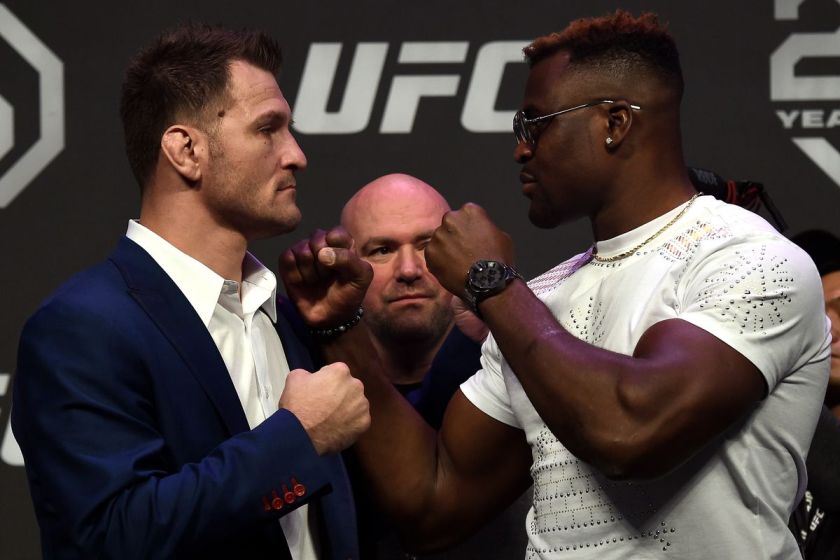 The UFC’s inaugural PPV of 2018 culminates with one of the most anticipated heavyweight fights in UFC history. Up and coming heavy hitter, Francis Ngannou looks to dethrone current champion Stipe Miocic on Saturday night in Boston, MA.

UFC 220 boasts a seismic evening of bouts this weekend as both the heavyweight and light heavyweight champions are contested on the same evening and in the evening’s main event, the stakes could not be higher for both combatants.

Stipe Miocic (17-2) is set to make the walk to the Octagon for the 14th time and his third time as champion since he claimed the belt in devastating fashion against Fabricio Werdum in May 2016. In his way is up and coming power puncher, Francis Ngannou (11-1) who has enjoyed a ton of hype behind him as he continues to ascend the heavyweight ladder.

Ngannou has been nothing short of confident in the build up to this fight and with four 1st round finishes in a row, it is hard not to afford him this cocky swagger he has been presenting us with. The 31 year old Cameroonian comes into the fight as the 4/9 favourite (Odds: Paddy Power – Odds correct at time of writing) which shows a measure of how real a threat he is to Miocic’s title reign.

Speaking recently at the UFC 220 pre-fight press conference, Ngannou appeared content to play the favourite and boldly predicted that a quick finish would be on the cards.

I think this is probably going to be a knockout. My prediction is knockout in under two rounds.

Despite being the champion and on the cusp of making UFC heavyweight history by defending the belt 3 consecutive times, Stipe Miocic appears to be relishing his role as an underdog for the first time in his UFC career.

Despite betting lines favouring Miocic in the past, the Ohio native seemed unshaken at the recent pre-fight press conference and even claimed that:

I’m always the underdog, but I don’t mind that.

Shortly afterwards, the champ posted a tongue-in cheek comment to his Twitter page as a gentle reminder to fans and media as to who is currently in possession of the much coveted title.

Francis Ngannou’s power hasn’t gone unnoticed and is in possession of some real hard hitting power shots but many seem to have forgotten that Stipe Miocic possesses power of his own.

Both fighters are bringing 4 1st round finishes each into the bout on Saturday night with an almost identical significant strike rate. Miocic – 50%. Ngannou – 47%.

Going on the above stats, this should be an absolute brawl but if Ngannou is planning to be sneaky and attempt a takedown for the first time in his UFC career, he would be wise in knowing that Miocic has a 75% TD defence rate in his UFC career to date.

Stats of course are made to be forged and broken but the stats do lie in favour of Miocic but his extra experience of 9 fights must be taken into consideration.

By now, you all know that Francis Ngannou has knockout power and if you haven’t seen his last fight against Alistair Overeem by now then you should really take a look at the “uppercut from hell” to see how powerful he really is.

However, Miocic poses a very different threat. His athleticism and speed may not be synonymous with the heavyweight division but his elusive footwork and counter punching is something that may cause Ngannou problems if he can’t adjust to the pace Miocic will push on him.

The champion is a relentless pressure fighter and is extremely durable particularly when he looks like he is on the ropes. You only need to look at his last fight with Junior Dos Santos when it appeared that his legs were giving out on him before he ended up finishing the fight due to strikes when asked to dig deep.

Ngannou would be wise not to head hunt early and pick his shots when he can and leave as few openings as possible. As has already been alluded to, Junior Dos Santos had good success in chopping the legs of Miocic to take away his movement. The challenger should look to expose the legs and cause Miocic to become a stationary target to land those power shots.

Miocic should look to drag Ngannou into the later rounds and test his cardio as he has never seen a 3rd round and beyond to date. Closing the distance, clinching and frustrating the Cameroonian could quickly end any hope Ngannou has of becoming champion and he certainly has the experience and skills to do so.

If Ngannou can touch Miocic early without overly exerting himself, he has a huge chance to knock off one of the biggest heavyweights in UFC history.

His gas tank and cardio hasn’t really been tested due to early stoppages and this is something that Miocic will surely look to expose this and drag Ngannou into a fight that he doesn’t want to be involved in.

If Miocic can use his footwork and counter punching, he can certainly frustrate Ngannou who may look to go head hunting and get desperate if he feels he is down on the scorecards early. Closing the distance and having dominant clinch control can go a long way to tiring his opponent and getting into a straight out fist fight with one of the most dangerous strikers in the UFC is not something Miocic wants especially when the stakes are so high.

It’s a fascinating fight and one which is certainly warranting the hype.