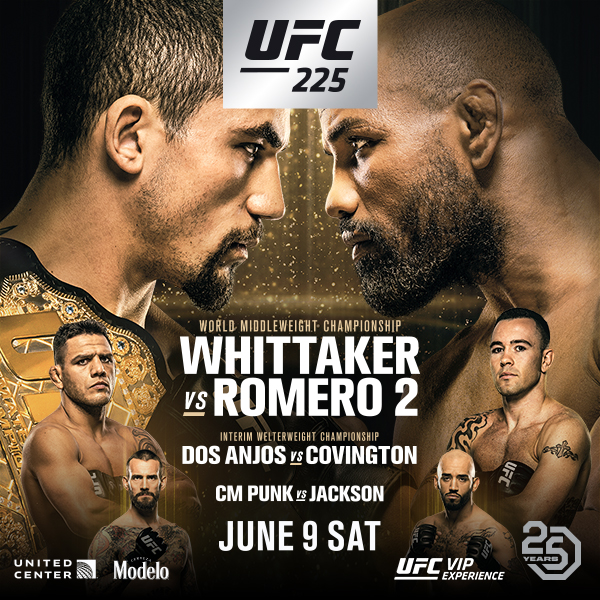 The UFC returns to a PPV slot this coming Saturday as the promotion returns to Chicago with a stacked card with two title fights on the menu.

It has often been noted that the UFC’s numbered pay-per-view events have been a bit top heavy as of late but UFC 225 has fight fans salivating and with good reason. There’s a lot to like about the upcoming night of fights in what is looking like a show filled with potential barn burners.

Australian born Whittaker, last fought Yoel Romero a little under a year ago and beat him in a very hard fought decision victory to claim the interim middleweight championship at the time.

Whittaker was later promoted to the undisputed champion and was due to defend his belt against Luke Rockhold but an injury forced him out of the bout. An interim title shot was won by Romero who stepped in on late notice and having earned victory, a shot at Whittaker is in Romero’s hands once again. 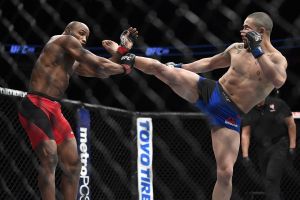 Romero possesses some of the most brutal knock out power at 185lbs and has knocked off some of the biggest names in the division including a devastating KO of former champion Chris Weidman at UFC 205.

Whittaker expects a different animal this time out and is no fool to shy away from Romero’s KO puwer. Whittaker has KO power of his own and has TKO victories in three of his last six bouts.

We could be in for a technical striking battle or an all out war come Saturday night.

In the evening’s co-main event, the interim welterweight belt is on the line to determine who will get the next shot against current champion Tyron Woodley.

Rafael dos Anjos (28-9) is looking to become the first Brazilian to win two belts in two different weight classes. The former lightweight champion has had somewhat of a renaissance since moving to the UFC’s 170lb division. 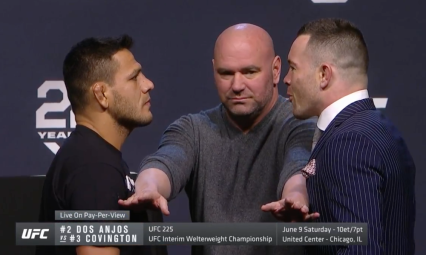 Dos Anjos is looking to make it four straight wins in his new division and after an impressive showing against Robbie Lawler last December, the belt is firmly in the Brazilian;s eye line.

In front of him is the ever gritty and game Colby Covington (13-1) who is currently riding a five fight win streak and is seeking to put on a show in front of a frenzied Chicago home crowd.

Covington has been somewhat of a heel as of late and hasn’t been shy in verbally sparring with just about everybody via social media.

The Oregon native can certainly back it all up. With his only loss coming by way of submission to Warlley Alves back in 2015, Covington has never looked back and he is looking to live up to his nickname and bring the “chaos” this Saturday night.

With 7 finishes to his credit from his 14 fights, it’s safe to say that this will be anything but dull.

The Rest Of The Card

Despite the card featuring former champions such as Alistair Overeem and Holly Holm, attention has been placed firmly on the opening bout of the main card.

Phil Brooks A.K.A “CM Punk” (0-1) is set to return to the Octagon after a very lopsided showing in his Octagon debut against Mickey Gall. The Chicago native is sure to get a decent reception when he makes his walk once again but there were holes in his game that you could have driven a convoy through.

Working with Jackson-Wink MMA, Brooks is hoping he can silence his critics and prove to the masses that he is a worthy contender in the UFC. 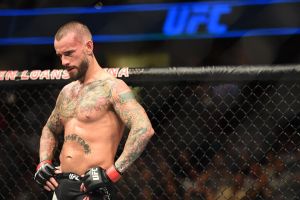 Opposite Punk will be Mike Jackson (0-1) who also fell short to Mickey Gall. By trade Jackson is an MMA journalist who took up professional fighting to gain a better understanding of what a fighter goes through pre, during and post competition.

Jackson arguably has very little pressure on him going into this fight but having been submitted in just under a minute in his debut fight, he will be looking to stake his claim and hope he can cause some waves in the welterweight division.

The aforementioned fight means that Alistair Overeem (43-16) vs Curtis Blaydes (9-1) was bumped from the main card to the televised prelim portion of the card.

Much criticism was sent UFC President Dana White’s way when it was announced that two 0-1 fighters would be opening a PPV card. 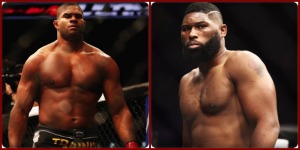 White’s justification was that CM Punk is a money draw to entice casual fans to purchase the PPV event and that Overeem would be better suited to be seen in front of a larger audience for free.

As annoying and nonsensical as it seems, White does have a point and the UFC have always looked to maximise their PPV buys as much as possible. This certainly rings true more so than ever while Conor McGregor is out of action.

Either way, it’s still an incredibly stacked card and one well worth staying up for this Saturday night.