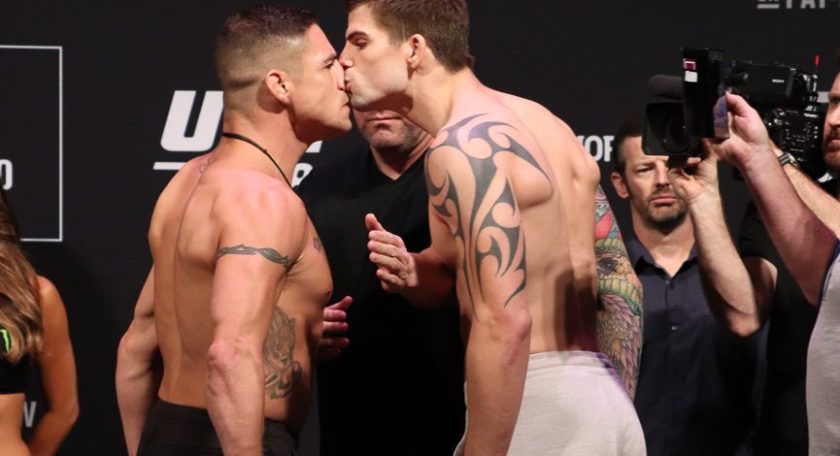 UFC 228 is upon us and with it comes a host of news which has been lovingly crammed into one handy article for you to digest ahead of tonight’s fights.

You read that in the Bud-Light voice didn’t you? Well, my job here is done and so is Darren Till’s, well at least until he gets into the Octagon to fight Tyron Woodley that is.

All the talk has revolved around Darren Till this week in the build up to the welterweight title fight especially around the topic of Till’s weight. “Will he make it?” Well, the answer is yes and yesterday afternoon the Liverpudlian weighed in at 169lbs with his middle fingers raised high in the air with a defiant, “fuck you” to the doubters ahead of the fight.

The fight is on, the fight is official and we have ourselves a highly anticipated match up on our hands.

That might be a slightly misleading headline so get your heads out of the gutter.

Unfortunately, Nicco Montaño, who was due to face Valentina Schevchenko for the women’s flyweight championship has been scrapped from UFC 228 after the champion was brought to hospital ahead of the weigh ins.

Her team announced that she was suffering with kidney issues and that she should be ok in the next couple of days but was not cleared to fight this Saturday night.

It now means that the UFC in their ever swift, yet overly hypocritical swashbuckling ways have decided to strip Montaño of her title and have said that Schevchenko will fight an unnamed opponent later on this year for the strap.

It certainly leaves a sour taste in the mouth… I mean, they didn’t even send her a “get well soon” card? Shocking.

Craig White is back in action this weekend against veteran Diego Sanchez at UFC 228 and things got heated in a very different sense at the ceremonial weigh ins last night.

White got into Diego’s face in a whole different manner when he dealt Sanchez a surprise kiss on the forehead during their face off ahead of their battle.

Some fans are surprised that Diego Sanchez didn’t get knocked out from the kiss.