Short Shots returns for the first time in 2019. New year, same old content. Your weekly look at some of the bizarre rumours and events outside of the cage.

Hello dear friends. It’s back. Your laid back look at the downright ridiculousness that is the world of mixed martial arts.

In the first of this week’s ‘DEAR JESUS CHRIST NO’ rumours, could Conor McGregor be actually close to signing a bout agreement to fight Paulie Malignaggi?

During the build up to McGregor vs Mayweather, Malignaggi was invited to a sparring session with McGregor to prepare him for the belt. What ensued was video leaks of the Irishman knocking Malignaggi to the canvas and a daily Twitter feud which was arguably more entertaining than the fight that actually transpired.

A report from Extra.ie suggest that the fight could go ahead and I think I speak for everybody when I say, ‘please don’t entertain this shit’.

When muggers get mugged.

No, that’s not the name of a cheap American clip show. This is in relation to Polyana Viana who midweek, halted – read: beat the shit out of a mugger who accosted her in Brazil. 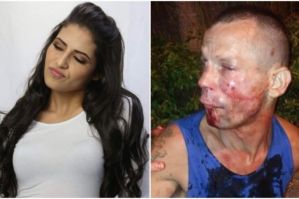 Above is the picture of the aftermath. Viana claims to have stopped the attacker with two punches and a kick after the assailant claimed he had a concealed gun.

Note to future muggers: Maybe ask what profession the person you’re about to rob does…. or, ya know, don’t rob at all.

No. No. No. No…  Just no. Before I even tell you what the story is, note to Oscar De La Hoya if you’re reading (I know you are).

If you are even contemplating hosting this shit, please just don’t. Walk away. Admit your failings and move on with your life.

Yeah, so anyway. Tito Ortiz apparently wants to fight Chael Sonnen again and if history has taught us anything, nobody will clamour for it but it will go ahead anyway and people will tune in and regret it almost instantly.

The pair were involved in a back and forth Twitter exchange during the week.

I’m on point and this guy has a big mouth that he won’t keep shut. This is personal. Plus it will be fun to TORTURE him in the cage. No submissions this time! https://t.co/lECRfOfjaQ

The truth is, I brought a guy into camp to mimic Tito’s style. We got in the ring and I said go. He went to throw a punch, so I got out of the ring and asked them to call me back when it was time to duck. https://t.co/Sh4cNotlKJ

As entertaining as Sonnen’s comeback was, let’s hope this fight stays online eh?

Parke in, Parke out…

So, earlier during the week The Writing Irish reported that Norman Parke had retired from MMA but not a full day had gone by when the Northern Irishman made us all look like fools when he said he wasn’t going anywhere.

Not going anywhere folks, 🙂 pissed with this whole visa crap & not sure about usa now, bellator are happy to release me if I like but need a deal sorted b4 hand, i fight to earn money and its the only way, so its either Rizin or ksw or one fc or whatever.

While Parke may be staying put, it’s likely that he will be released from Bellator due to VISA issues. Parke has fought with KSW previously and may find himself back there in the future.